VIDEO ON WHY SHOULD THE WORLD WALK-IN YESHUA’S FOOTPRINTS?

WHY SHOULD THE WORLD WALK-IN YESHUA’S FOOTPRINTS!

Christ is the Rock on which the Christian church is built; and of the streams that issue therefrom, all believers drink, and are refreshed. It typified the sacred influences of the Holy Spirit, as given to believers through Christ. But let none presume upon their great privileges, or profession of the truth; these will not secure heavenly happiness.

Carnal desires gain strength by indulgence, therefore should be checked in their first rise. Nothing in Scripture is written in vain; and it is our wisdom and duty to learn from it. Others have fallen, and so may we.

The Christian’s security against sin is distrust of himself. God has not promised to keep us from falling, if we do not look to ourselves. To this word of caution, a word of comfort is added. Others have the like burdens, and the like temptations: what they bear up under, and break through, we may also.

God is wise as well as faithful and will make our burdens according to our strength. He knows what we can bear. He will make a way to escape; he will deliver either from the trial itself, or at least the mischief of it.

We have full encouragement to flee from sin, and to be faithful to God. We cannot fall by temptation, if we cleave fast to him. Whether the world smiles or frowns, it is an enemy; but believers shall be strengthened to overcome it, with all its terrors and enticements. The fear of the Lord, put into their hearts, will be the great means of safety.

So, why is it that there are those amongst modern day believers, who fall to this form of evil and suffer the same as the weak minded who trust in science and the wisdom of the world?

When I journey back to John Gills commentary: Paul proceeds to lay before the Corinthians the case of the Jewish fathers, who, notwithstanding the many Favours and privileges they were blessed with, yet falling into lust, fornication, intemperance, and idolatry, their carcasses fell in the wilderness, and entered not into the land of rest; wherefore the apostle would not have them be ignorant, or unmindful, or take no notice of these things, since they were for ensamples to them, and written for their admonition, and were warnings to them to take care lest they should also fall.

As I continued to research this material, I came upon an interesting fact Mr. Gill pointed out and I believe it significant for today’s believers who might worship under this suggested walk? The Lord provided during the day a cover of clouds to protect from the sun and a pillar of fire at night for protection. a protection of his people from the vindictive justice and wrath of God, and from the rage and fury of men and devils.

Please note there is one item of particular interest which must be paid attention to “wrath of God.” Which I point out is important to recognize and understand the significance. Mr. Gill further relates:  and all passed through the sea; the Red sea, in a very miraculous manner; Moses by a divine order lift up his rod, and stretched out his hand over it, and the Lord by a strong east wind caused it to go back, and made it dry land; the waters were divided, and rose up as a wall, on the right hand, and on the left, so that the children of Israel passed through it on dry ground, and all came safe to shore, and not one perished; and yet but two of these entered into the land of Canaan. OrigenF3Homil 5 in Exod fol 37 col 3. E.

What is significant is the number out of the millions who left Egypt only two of that original group entered the land of Canaan. The significance of this is the Lord took them for forty years into the desert to purge His flock of sin and during that time did just that even while they were under the protection of the cloud from the wrath of God. But be this as it will, it is certain that they all passed through the dividing of the Red Sea and came safe to shore.

In a recent conversation with a young woman, I asked her to define what “Born Again,” meant to her. Her initial reply was, “so far,” those she has met who profess being born again spoke one thing and did another, and in her eyes presented themselves as liars. Something she didn’t want to be a part of as her belief was if she was a good person, she would be okay.

I then repeated the question stating she had not answered my question of what did born again mean to her. She stated she could not answer because she had not experienced it. Here it became clear why the Father has placed it on my heart to open the “TRUMPETER’S CALL Blog.” To put forth a perspective outside of the structured church scenario.

A place like an oasis where those in the desert of misinformation hypocrisy can find a pool of answers able to quench their thirst without being threatened yet know what is presented is based on truth and action making it come alive.

My first podcast under this definition “In sin with delight, thinking we the righteous are fools for all our pains!”  I reference Luke 8:23-25 KJV, but as they sailed, he fell asleep: and there came down a storm of wind on the lake; and they were filled with water and were in jeopardy. And they came to him, and awoke him, saying, Master, master, we perish. Then he arose and rebuked the wind and the raging of the water: and they ceased, and there was a calm. And he said unto them, where is your faith? And they being afraid wondered, saying one to another, what manner of man is this! for he commanded even the winds and water, and they obey him.

How many today supposedly walking as born-again believers will fall into the same category as these Apostles filled with fear because of a turbulent scenario the world labels as a pandemic. How many, if I questioned, know about the promises God has placed before us in Psalm 91:1 and 9-16 and claim them as their covering?

How many have one foot in the world and one in religion (not being spiritual) and believe they can claim being born-again? I wonder how many of them believe that God is an all-forgiving god and ignore that he is a chaste God and punishes those who walk in compromising sin. That when life presents a situation such as Covid 19 has brought forward like the fearful Apostles they call out for God’s help but recognize their plea for intervention has fallen short and then question why their prayers have not been answered.

I looked up the word ABIDE it stated the following: to bear patiently, to endure without yielding: Withstand the onrush of the enemy, to wait for the coming of the Lord., to accept without objection, and most importantly to remain stable or fixed in a state.

We have in our daily sitting at the Lord’s table learned that our going into the den of wolves daily is an act of mercy and an introduction to the one Physician who can heal. To many place their trust in worldly wisdom and what is called science for the relief of their maladies of life. What comes to mind is the example of the woman who had an issue and spent her life and savings with the physicians of her time and found no relief, except the relief of her fortune. Believing within herself she would be healed if only to touch Yeshua’s hem she would be healed. Matt.9:20-23.

The actions of this woman should be an example to the world living within paranoic fear of Covid-19 there is an answer other than the promised relief and restoration to normalcy via the vaccine.

Another act of faith which is current and can be witnessed firsthand through the faithful actions of a humble pastor who has ministered truth to his flock who stand on the word of God and have exercised their faith for a period of months as an act of mercy to recognize who the true Physician is to trust and be healed. The following link is a testimony via the statement of the church’s pastor.

However, it will be difficult for those in the world who place their ultimate trust in science and the physicians of the world, to let go and realize to place their trust in the real Physician who can heal, is the absolute answer to the pandemic plaguing the world and those abiding in fear of it. We have two very powerful testimonies before us of the power of God to protect his flocks. 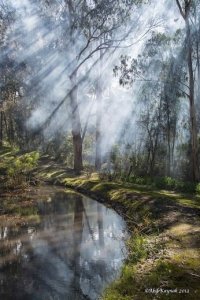 Remember, these messages are given by a humble servant obedient to our Lord Yeshua as a “Watchman.” This, I pray for all. ”Our Heavenly Father brings us to the river which bringeth forth fruit so we may partake of its sustenance and be filled spiritually with nurturing wisdom, and humble dedication in service to Yeshua.“ “Blessings to All.” As you go forward in peace, knowledge, and strength. In the name of Yeshua, we pray Amen and Amen.