Nevertheless, if thou warn the righteous man, that the righteous sin not, and he doth not sin, he shall surely live, because he is warned; also thou hast delivered thy soul. (Ezekiel 3:21)

In the first Trumpeter’s Call, we were warned to be aware of our position in God, to know where you stand and be prepared to recognize what the Final Trumpet of

that warning revealed. These clouds are shrouds of knowledge showing how evil is bringing darkness into our lives.

THE FIRST TRUMPET: As I peered out at the horizon I continued to see the clouds

drawing ever so near and filling the surrounding area, they were swirling mysteriously and it appeared something was being hidden in the folds of the swirls. I could only get a glimpse occasionally but couldn’t clearly make out what they were shrouding. As the clouds crept further in and engulfed more and more it became clear what was hidden was temptations of all forms slated to be a part of mankind’s lives. Psalm 106: V35 “But were mingled among the heathen, and learned their works. v36 And they served their idols: which were a snare unto them.

THE SECOND TRUMPET: It was becoming clear that a bombardment of our

spirituality was about to occur and there were a large number of casualties spiritually. I recognized what God was saying in Genesis 6:5 And God saw that the wickedness of man was great in the earth, and every imagination of the thoughts of his heart was only evil continually.

THE THIRD TRUMPET: Through the shroud, I could see how mankind was facing an

onslaught of temptations that have and will continue to place multitudes into Bondage and steal away their position in God’s plan. The snare was being set to draw mankind further into an unknown form of bondage. It has the appearance of sustenance on all levels whether labour, skilled or professional, it was going to affect those who were not aware of its presence on a spiritual level. I could see how this form of bondage was working to bring unsuspecting souls into bondage to worldly possessions, making those possessions difficult to set aside through dependency on their easy accessibility and convenience. Psalm 106: v39 Thus were they defiled with their own works, and went a whoring with their own inventions. v40 Therefore was the wrath of the Lord kindled against his people, insomuch that he abhorred his own inheritance. v41 And he gave them into the hand of the heathen, and they that hated them ruled over them.

THE FINAL TRUMPET: As the cloud became thicker and reached deeper from the 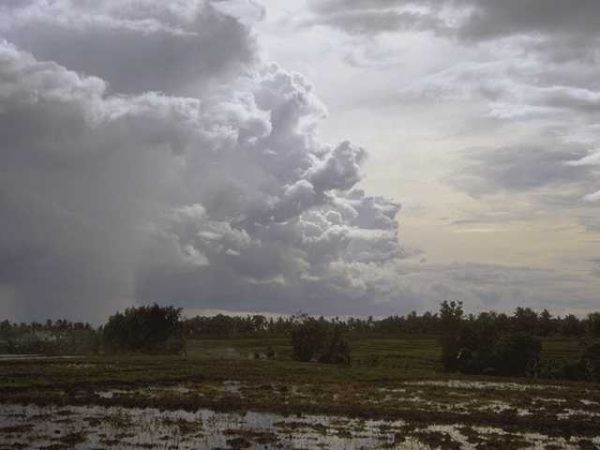 horizon it became apparent that those who had no spiritual discernment would not have the knowledge or understanding of what was transpiring right before their eyes. Mankind would continue moving forward in sin not realizing what seemed to them as peace was a form of hidden bondage. For those with spiritual discernment, they would have knowledge and understanding and move forward knowing what lay ahead. 1Corinthians 10:1 Moreover, brethren, I would not that ye should be ignorant, how that all our fathers were under the cloud, and all passed through the sea. v2 And

ahead, gather closer to the Lord hear his teachings through the Holy Spirit and the Scriptures as a blueprint for your future. Recognize that all will be given the same message some will hear and discern some will listen to and not discern, and some will not understand, but all will be wrapped in the cloud. Walk in the ways of Spiritual guidance, and you indeed will survive all trials and tribulations.

CLOSING PRAYER: Heavenly Father I pray you will loose the Holy Spirit upon those souls who hear your call. Bring them knowledge and understanding with a spirit of acceptance they might receive teachings from the Holy Spirit to guide them through their time of tribulations as they journey forward. I pray in Yeshua’s name Amen and Amen.

to our Lord Yeshua as a Watchman. I pray for all. ”Our Heavenly Father brings us to the river which bringeth forth fruit so we may partake of its sustenance and be filled spiritually with nurturing wisdom, and humble dedication in service to Yeshua. “Blessings to All.” As you go forward in peace, knowledge, and strength.
Robert

Yeshua, as a Watchman. This I pray for all. ” Our Heavenly Father brings us to the river which bringeth forth fruit so we may partake of its sustenance and be filled spiritually with nurturing wisdom and humble dedication in service to Yeshua. “Blessings to All.” As you go forward in peace, knowledge, and strength
View all posts by Yeshua's Watchman →
This entry was posted in SPIRITUAL Kowledge. Bookmark the permalink.